The following items were sent to me from Mary Lou Shremshock in an e-mail. Mary Lou, her husband Jerry and their family of 5 boys (now six boys) resided in the house that David and Ruth Meese now live in on Goshen Valley Rd. The Shremshocks lived there for several years in the late 1960’s and part of the 1970’s. I, along with my sister Teri, babysat for the family and really enjoyed them. Mary Lou has said they are planning to send some photos and other memories of Goshen in the near future. I will then be able to be more specific with the years they resided here.
Thanks! Cindy Krocker Davis

The following is in Mary Lou’s words:

– Jerry and I have many fond memories of our time in Goshen. Having been raised in a suburban neighborhood we thrived on country life while raising our sons. After moving to the Columbus area we still opted for the country. Mary and Paul Mehok were probably the best neighbors anyone could have. Mary showed me how to garden and can our harvests. Many a cup of coffee was shared in their kitchen or ours. Paul was always coming to the aid of this young bride- Jerry commuted to Columbus for several months. A leaking hot water tank, Tim climbing the tv tower, Tim falling down on a milk bottle and causing a need for stitches, thus a trip to the emergency room- Paul was always around to help.

– My first encounter with Halloween country style, Jerry was taking classes at Kent State still and I was home alone with the boys. Terrible raquet on the front porch. I had no idea what it was. Next morning, Mary laughed when I told her. It was corn kernels thrown across the porch and of course some soap on the windows. Jerry was home for the next Halloween and dressed as the headless horseman and scared some of the neighborhood kiddos. Lots of fun.

– And I will never forget one night returning from Akron and the car broke down right at the turn onto Goshen Rd. I had one of the boys (babe in arms) with me and your family (Ed and Mary Krocker family who used to reside across from the Zeisberger Cemetery) was the only one that opened the door to me that dark night. Thus, began our relationship of babysitting. Lucky us. (No, lucky us!)

– Joshua, our last son was born 11 years after Ben. Scott is now 46 in May, Tim is 44, Patrick is 43, Ben is 42 and Josh is 31 in May. All are married. We have seven grandkids (finally some girls in the family- three granddaughters). Scott, Tim and Ben work with us. (Shremshocks Architects and Engineering) Patrick is a director of an outdoor education center, in Alabama and Josh is our starving artist. He is a potter and has a studio and gallery in Lithopolis, a suburb of Columbus.

Paula Mehok Putman receives the Goshen Neighbor on the Year Award in 2007. 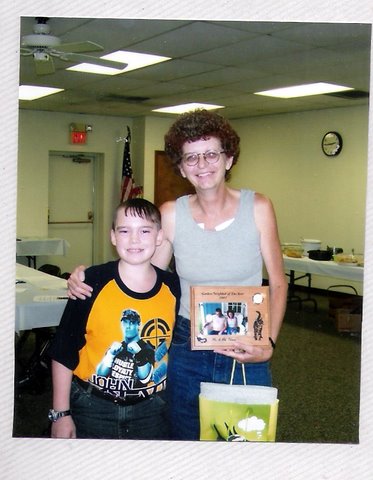 Paula Putman receives the Goshen Neighbor on the Year Award in 2007. She and husband Mark played a large part in the rescue of Jeremy White after he had a seizure.

Paul and Mary Mehok moved to Goshen on May 21, 1954, after purchasing the property which was formerly the Pissocra’s Store. They settled here to be closer to Paul’s work at Warner and Swasey’s. Mary said they didn’t want to live in town. The couple had three daughters, Sharon, Paula and Amy. Paula and her husband Mark Putnam also reside on Goshen Valley Rd. in the house once owned by Carlo and Virginia Terazzi. Amy also lives on Goshen Vly. Rd. near Mary. Sharon (Freed) recently passed away after suffering with many health issues. She and her husband Bill (also deceased) have a son, Andy. Paul died on April 12, 1992 after a long battle with cancer. Mary later married Norman Stover, also of Goshen on May 22, 1994. He is now deceased.

If you do not see your family above, search for it: